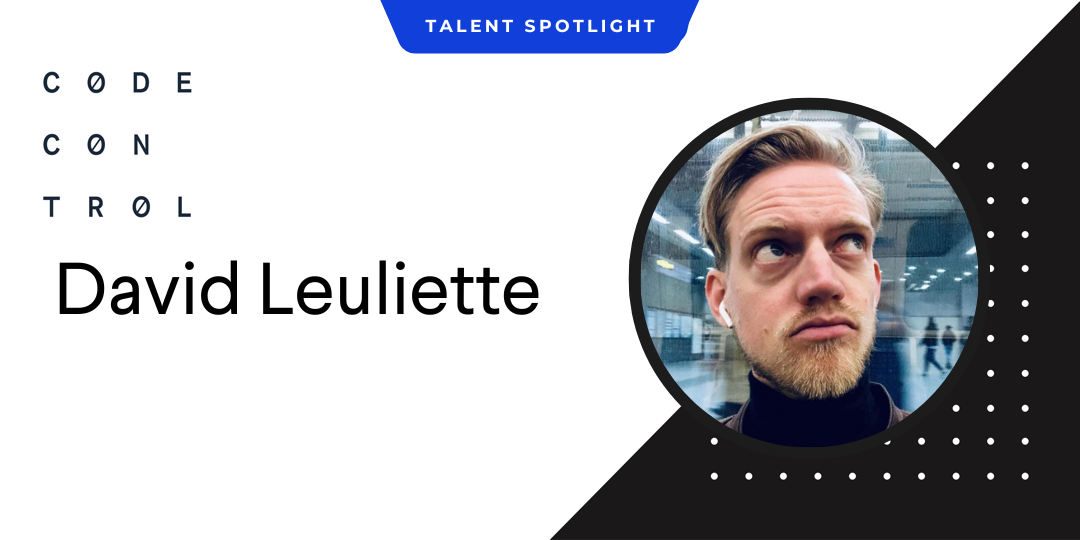 Meet David Leuliette, a freelance React Native developer, designer, blogger - and a CodeControl member since 2020. We recently did an “Ask Me Anything” session with him to talk about his freelancing experience. He gave us some valuable tips about scaling your business as a freelancer.

✨ Hello David, let’s start with the first question: How did you open the freelancing world for yourself?

Actually, I didn’t. The freelancing world opened to me. One time on vacation, a guy asked me if I wanted to do a course on how print designers can become web designers. I thought why not, and I did it for 200, 250 euros. Not a good idea because it took a lot of time. But that was my first experience as a teacher. At that time, I had a full-time job, and I worked for clients on the side, taught boot camps and so on. I was also involved in Open Source communities. So I always had side projects. Around four years ago, I became a full-time freelancer. At first, I was a little afraid because I hate paperwork, but then it was easier than I thought.

You can check the slides for the course here, they will live on the internet forever.

✨ Speaking of paperwork, what resources helped you to make informed decisions when you became a freelancer, and what have you found to be the most useful lessons you have learned?

I read books about entrepreneurship, lean management and lean start-up. But generally I just try random things, and they fail, so I try random things, and eventually they will succeed. They key is to nevert stop doing. For example, I found a hack for LinkedIn to get more contacts. I also followed a bootcamp about how to scale your business, which was really helpful. I’ve learned five things there I’m going to share with you.

Number one: When you’re a freelancer, your first job is to generate leads. You have to do that every day. Or automate it, which is what I do. Second thing is, you have to have a crystal-clear offer. For example, I only do React, which makes it easier to do marketing. In people’s minds, I’m the React Native guy. Third thing is, automate as much as possible, your onboarding process for example. I have some hacks for that on my website, if you want to check them out.

Fourth thing is, use the IKEA methodology. IKEA makes a lot of money because when you’re buying something there, you are basically working for them because you assemble your furniture yourself. On my website, I ask people precise questions to see if they know what they want. If they don’t, I’m not the guy, because I don’t have time to educate them. And the fifth thing is about pricing. That’s not always easy, and it can be dynamic. But you have to be clear about your prices.

✨ About generating leads, what automation do you have for that? What is your daily routine?

I don’t have a routine, because I don’t have to actively look for leads. I’ve written blog articles, and I have a show on YouTube/Twitch. People can book me on my website. I have a little form where I ask for their email, job title, why they want to hire me, what their biggest challenge is at the moment. All these contacts are on MailChimp, so when I’m looking for a job, I can write to them to reactivate them.

I always try to be helpful and nice to people, even if their project is not interesting for me, or they don’t have the budget to pay me. They might come back to me later, or they might recommend me to someone else.

✨ You did Open Source, something a lot of people do who become freelancers later. What did you learn from that?

Doing Open Source helped me understand that some companies are doing a terrible job, and still they think they are the best. When you do Open Source, you learn to respect people’s time, how to solve a problem, you learn to write down your thoughts and communicate effectively. It’s also great because there are conferences where everyone meets, and you can catch up.

✨ How do you do your branding, how did it start, and what do you do to keep your brand thriving?

First thing, you need to have the same picture everywhere. That’s really important. Use your name, or if you use a nickname, make sure you use it everywhere to be consistent. Plus, I always come up with new content, and I try to get the best resources for that. For example, I did interviews with top developers at React Summit in Amsterdam. Obviously I didn’t forgot to add nice keyword “React Summit Unofficial Aftermovie” —that way i am in the top tiers of search results.

✨ Who or what has been like a mentor for you on your freelancing journey?

Books and magazines, for example a famous German company called Smashing Magazine from Vitaly Friedman. I also buy their books. And I go to conferences to learn.

✨ What is your experience with no-code, and what do you think about the future of no-code?

It’s nice. I also use some tools like Airtable. If people don’t have money for production-ready, cutting-edge technologies and awesome UX, they can use no-code tools. I don’t think developers will disappear, though. It depends on the use case.

Check out the video here to get more insights from David in the full conversation:

And some more useful resources for you: