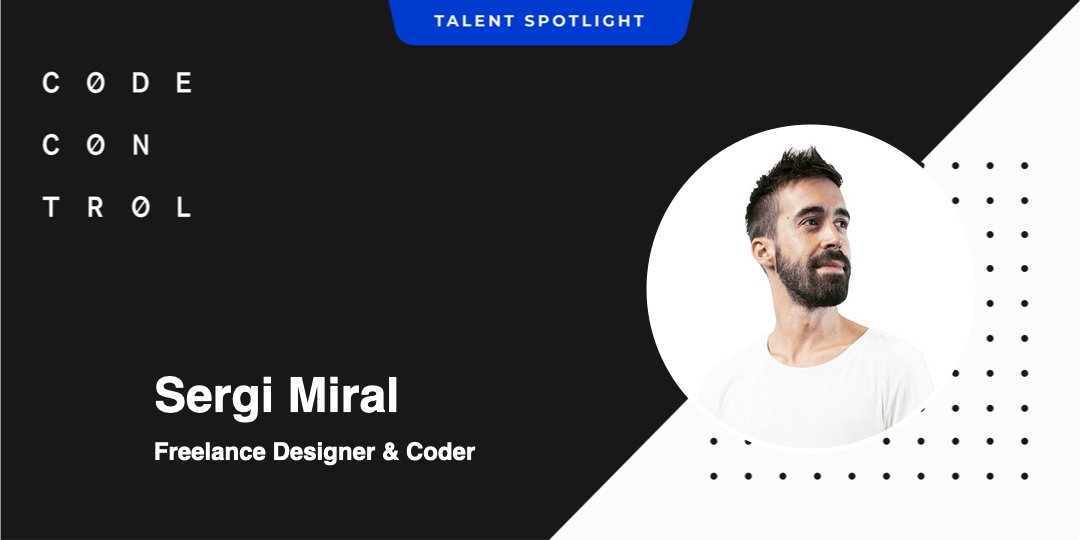 Meet Sergi - a freelance designer and coder from Barcelona based in Berlin. Segi’s name is regularly mentioned during the internal CodeControl code team meetings as he’s not only a valuable member of the community, but he’s regularly working on some of our initiatives (stay tuned for more details coming soon).

Being more into the technical side of the design area, Sergi’s been doing frontend work for years now, but always prefers to stay on the design side of things and use those skills to support the design-to-development pipeline. So coding for Sergi is a skill that he sees as part of his “future of work”, and not as a service that he’d provide separately as a freelancer.

When browsing his portfolio, you’ll notice various projects - from building the digital interface for an internal game for Bayer, through revamping the look and feel of Zalando’s mobile apps, to building a full-fledged admin tool for one of the Siemens Mobility projects.

When jumping on a call with Sergi, you’ll notice a guitar and a microphone in the background. Not only a skilled designer, he’s also a hobbyist musician, saying that if he manages to unlock the holy grail of passive income, that’s what he’ll be doing for the rest of life.

We’re talking to Sergi today to find out more about his freelance journey and his creative process.

✨ Sergi, what motivated you to become a freelancer?

At some point I realized that having one single project for me was never enough and I always wanted to have side projects. I also realized that I am easily getting burned out when working on one project. Another thing that was bothering me was the fixed amount of hours to work on a project - my productivity lasts for about 4 hours and some days I’m more productive while others are just the opposite.

Plus I’ve always had side projects for learning purposes - I’ve always enjoyed doing frontend development on the side and then later I started doing some backend projects and I was also building my own tools, plugins and music apps. I realized that this was my ‘go-to’ when I was getting bored working on only 1 project. And this made me realize that I always needed to have at least 1 side project and when I started landing some part-time gigs, I realized that I can combine gigs, achieve the time management that I’m striving for and prevent my own burnout.

If I have to resume - I’d say that “time management” motivated me to become a freelancer, as being one gave me the opportunity to manage my own time and resources.

I was always in touch with different sources of projects. My first CodeControl project was for Siemens Mobility. They wanted to create a small proof of concept inhouse for 1-2 months with a small team. That proof of concept went well and they decided to extend it a bit more and turn it into a demo project for a presentation. This was supposed to last for another 3 months and we kept working on the project.

I’ve been a CodeControl community member for more than 2 years now and I’ve been working on some cool gigs with Siemens and Bayer, a few other small projects and now I’m helping CodeContol with their new product.

✨ Which skill is crucial to an individual’s success in the product design area? Why?

In short - learn the tools, the materials and meet the people behind the tech! I’m coming from the design side of the projects and I’m used to the talk about knowing your user and their experience and I don’t argue that this is one of the essential parts of our jobs. However it’s taken for granted that we should know how the rest of the process works and usually designers do not necessarily know about development, and developers would not know anything about the marketing stuff.

My piece of advice for every designer would be - if you are going to work with 20 developers, it’s just nice of you to learn about their world and to show them yours.

✨ What’s the soundtrack of workflow?

Mogwai – Kids Will Be Skeletons and Explosions In The Sky – The Birth and Death of the Day.

I believe that we’re going to grow more and more into the overlapping and collaborative roles and team setups.

Similar to what I explained in my answer to the previous question - I aim every day to become more and more a developer and also strive for developers to become more and more like designers in their everyday job. I believe that people will start to gain skills from all the spectrum of the jobs in the projects that they’re part of and depending on the specifics of the job everyone can adapt to deliver either more volume or quality.

Check out his portfolio and his CodeControl profile.