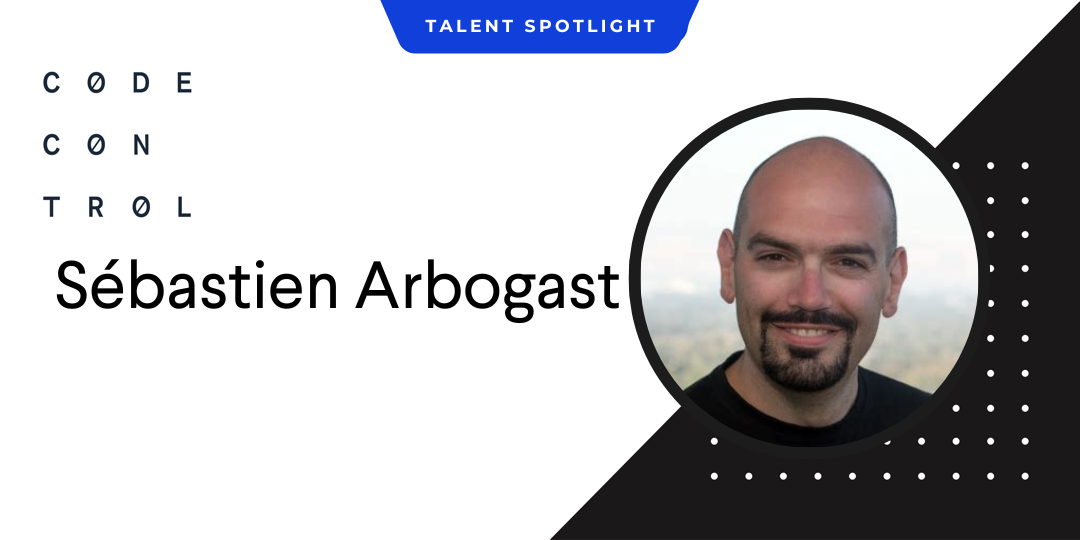 Meet Sébastien Arbogast, a freelance full-stack developer and tech entrepreneur with over 15 years of experience in software development and methodology. He’s a decentralization and blockchain evangelist with expertise in smart contracts and decentralized application development. In addition to teaching these topics, he’s also the host of ProofOfCast, a podcast about cryptocurrencies, blockchain and decentralized platforms in French. And he is an experienced digital nomad!

Sébastien recently joined us for an Ask Me Anything session to share his freelancing experience with us. He told us a lot about how freelancing has changed in the past years, what it’s like to be a digital nomad, and why he’s a bit concerned about the way Web3 develops.

✨ Hello Sébastien, let’s start from the beginning. Tell us more about your professional experience and how you started your freelancing journey.

Sure, after graduating from engineering school in France, I started working as a consultant for a consulting firm in Belgium for about five years. The main thing that convinced me to join was that they had a very interesting culture with flat hierarchies. I really loved the experience there and the company culture. Then in 2008 when the crisis hit, all the consultants came back to the parent company of this agency, which was in France. They decided to bring back their own culture and do things their own way, which wasn’t my thing. I was confident enough to be on my own, and I decided to go freelance in 2010.

✨ Is there anything you would do differently if you started your freelancing career now?

I probably would have started my company earlier. At first, I wasn’t sure what to expect in terms of revenue, and so I became what we call a “physical person” in Belgium. You’re a freelancer, but you don’t have a corporation. You just have a VAT number, and you can invoice with that. It’s easy to set up, but it’s limited in terms of taxes, for example. Back then, I was confident enough to become a freelancer, but not confident enough to set up my company. So I had to do that later, but I could have done it from the beginning.

✨ This sounds like it’s an information issue. Do you know of places where you could access this information now, but not back then?

I think the landscape is different now from what it was like 12 or 13 years ago, especially in terms of accounting. There were a lot of old-school accountants who wanted to work with larger companies with employees, but not so much with solo-entrepreneurs or freelancers. Now, there are people who specialize in that. The freelancing model has become way more popular, and that has helped a lot with the information issues.

✨ You were a freelancer early on. What other changes or transitions have you noticed in freelancing over the past years, for example shifts in mindset or things that have transformed the landscape?

When I started freelancing it was mainly a shift in status, but I would have only one main client at a time, like a full-time job, and then some small side gigs or start-up ideas on the side. I would work for the client just like an employee with usual hours. But instead of getting a payslip at the end of the month, I would send my invoice and wait for 30 days to get paid. That was the only big difference. It took me a few years to realize that this would only get me in a certain kind of companies and projects. I worked a lot with banks and other big companies. Often I didn’t really enjoy my work and didn’t bring a lot of value.

Then I discovered smaller companies and start-ups. They don’t want to pay for an intermediary like the bigger companies often do. And they have particular needs when it comes to projects. Their main concern is flexibility. They don’t always have the money to invest heavily in development. Sometimes they want to wait until they’ve stabilized their next round of funding. They need people who can work with these ups and downs. It’s difficult with employees, but it’s easy with freelancers they hire directly. We as freelancers can have several of those clients in parallel, so we don’t have to put all our eggs in the same basket. And it’s more interesting too. I started doing this when I wanted to become a nomad and I needed to become more flexible for that.

✨ How did you become a digital nomad? You told us that you had been thinking about it for a while. Was there an exact moment when you decided to take the step?

It started in my head one or two years before I actually did it. I read some blogs and got interested in NomadList, which is a popular community for nomads. And I discovered Hacker Paradise, a company that organizes trips around the world with a bunch of nomads in the same location. It’s been my main way of traveling for the past few years. When I discovered all of this, I realized that even if I found a client who would allow me to work remotely, I would still be stuck with the time zone and not completely flexible to travel. So I first adapted my personal business model before I became a nomad.

At the beginning of 2018 I started to do some experiments. I wanted to make sure the lifestyle was the right thing for me. I started doing some coliving in Switzerland. It was nice, but I decided coliving was not the best option for me. I wanted to see more people and to have more diversity. After that, I tried to travel on my own for a bit. But even though I’m an introvert, I also need community and interaction with other people, and traveling alone was frustrating for me. Then I joined my first Hacker Paradise trip to Osaka, Japan, and then to Seoul, South Korea. It was just what I had been looking for.

I decided to give up my apartment in Belgium because I couldn’t travel full time and still keep it. I went back to Belgium and sold everything, my car, my motorcycle. Everything I owned fit in one suitcase and a couple of backpacks after that.

I believe we think too much in categories of nationalities, which causes a lot of problems. I love being a nomad because I can discover something new together with other people who have different perspectives that we can compare. Some nomads give up because they feel lonely. That’s why I travel with groups, to get that feeling of community.

I started working with Web3 from a completely different angle, not focusing on community, but the paths ended up intercepting in a way. My main starting point with Web3 was that I believe our democracy is going to fail in the long run. If we want to tackle important challenges on a different scale, we need to decentralize power in many ways, in financial, political and social ways. Ethereum got me hooked in 2016, and then I went to a conference where Ben Horowitz was speaking. He pointed out that crypto companies are not only about cryptocurrencies, and he mentioned some of the other use cases. I was very interested, and I started to dig deeper into the topic.

After a while I realized there weren’t many resources for developers about cryptocurrencies, smart contracts and decentralized application development. Together with a friend, I decided to create a course and put it on Udemy. We launched it in 2017, got a lot of feedback, and created some form of community around it. Now we have over 20,000 students on the course.

But right now, I’m a bit worried about the direction the space is taking. I feel like there’s a lot of inequalities and imbalance. If we don’t fix that, we’re going to reproduce the same conditions that led to the unequal system that we have now. With our education, we want to bring in more diverse people. The easier we make it for all people from different backgrounds, the better. That’s my main motivation to keep going.

✨ If you could change one thing in the way you started with Web3, what would that be?

At the beginning, we talked about this topic in a lot at developer conferences, and the people there are very similar. Maybe it’s because some developers don’t go there because they don’t feel comfortable and safe there. What I would do differently looking back, I would balance it out and try to introduce different people and communities to the topic. We’re working on the next version of the course, and the biggest part of it is not going to be on Udemy, but on our own platform. There we can do our own marketing and target communication in a different way to reach more diverse people. On Udemy, they mainly show it to developers.

✨ You mentioned that some developers don’t feel safe at conferences. What can be done to change that?

That’s a big topic. One part is that inclusivity has to be more than a buzzword. You have to create the space in a more active way than just by writing a code of conduct. There’s some work to be done in terms of education and messaging. The second aspect is to have some positive discrimination in place, to put other kinds of developers to the forefront. Sometimes it means having a deliberate policy, for example about how many women should speak at the conference. And of course it’s about all minorities in that space, not only about women.

✨ There is some instability in the tech world. What do you think about the current situation in the tech market?

There’s been a lot of movement in terms of management culture and modality because of COVID. The whole trend around remote work is shifting to asynchronous work. Companies who have been at the forefront of remote work are now switching to asynchronous work. They ask themselves how they can make sure they can work without ineffective meetings, what tools and culture they need. There are job boards specifically for async work popping up. Of course you have to change your company culture, and it’s harder to grow it. Work is not the main provider of community anymore. There are a lot of questions. It’s an exciting time to be alive.

Check out the video here to get more insights from Sébastien in the full conversation:

Feel free to connect with Sébastien on LinkedIn.

Here are some more resources for you: